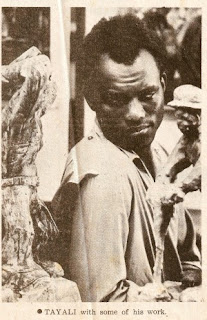 Photo 1. Tayali in a 1977 Zambian newspaper in which a development plan for the arts is discussed. At the time 34 years old he was determined to be Zambia’s leading artist both in art production and art organisation.

Henry Tayali lived from 1943 to 1987. He was born in Serenje, Zambia, but spent most of his school years in Bulawayo where his father worked. His artistic talent was spotted and appreciated at the secondary school he attended. Soon after his return to Zambia – just Independent and still wealthy – he received a government grant for his academic pursuit of the arts. Government at the time, under leadership of president Kenneth Kaunda, supported thousands of talented Zambians to study abroad so as to create the intellectual and professional force that was to develop Zambia into a modern functioning nation-state. Tayali’s initial academic art education was in Makerere University at Kampala, Uganda, from 1967 to 1971, where he obtained a B.A. Makarere University at that time had a flourishing art department and until the rise of Idi Amin was an African University of good standing. From 1973 to 1975 he continued in Germany at the Düsseldorf Art Academy. He got his masters supported by a German grant. He was a graphic artist, sculptor and painter. Most of his graphic art is done in the typical Tayali style of “free” figurative imagery. In this work “expression” overrules realistic representation; and sometimes the figurative reference seems to be not more than pretense in the overriding interest of making an image in its own right - as an image. 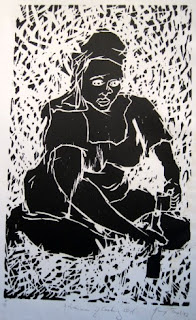 Photo 2. “A Measure of Cooking Oil.” Woodcut by Henry Tayali. 1982. Here we see Tayali as a mature graphic artist pretty much at his most figurative. His graphic work often has a social reference; in this case to the shortages of essential commodities that were one of the characteristics of the second republic. 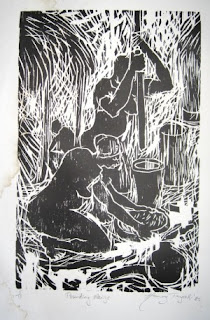 In some of his work he transposed his abstract way of painting to the printing table. He was, no doubt, a good graphic artist. In painting he started out as a figurative painter but in his mature years he developed a personal variety of abstract expressionism, which, to him, was highly intense and emotionally charged.  I suppose it came about by his studies in the early seventies in Germany. The quality of his sculptural oeuvre varies greatly – there is the tremendous metal bull along the Lusaka airport road on the one hand, and the clumsy Graduate at the University of Zambia (UNZA) grounds on the other hand.

My first encounter with him dates back to December 1975 when Fakson Kulya and I had our first exhibition at the Public Library of Lusaka. I had arrived in Zambia in April of that year and was looking for artists to work with. Fakson was the first person I met. Our intention to form a group of co-operating artists was extensively publicised in the newspaper The Daily Mail, at the time of our exhibition in December 1975. This event is described in detail in Zambia Art Chronicles no 1, which is about Fakson Kulya. The journalist had utilized the occasion to lash out to the then Department of Cultural Services, perhaps to settle some old score. Fakson and I were manning the exhibition in the quietude of the library reading room when:

Trevor Ford and Henry Tayali stormed the premises after the publication of Daniel’s article armed with expensive and big cameras. They photographed everything. All of our little art work - the work we had was small in size and there was not much of it; as if it was subversive material, endangering national security. After this intimidating show the duo disappeared and unfortunately I have never seen a print of the photographs they took. Henry happened to be Zambia’s showcase artist at the time and Trevor was an internationally acknowledged cartoonist of Welsh extraction.

End of quote out of the Art in Zambia Blog post Fakson Kulya, folk artist. Now why would Tayali be all up in arms when a government department was criticized to which he was not directly associated? Henry since his return from studies in Germany in 1975 until his death in 1987 was the UNZA resident artist/lecturer. He was a dominating and domineering man, he wanted to be seen as the representative and leader (if not the boss) of the Zambian artists and in that world there was no place for an outsider championing the cause of the poor self-styled artists living in the urban compounds (townships) of Lusaka or in the servant quarters of those that could afford to buy art work. What made matters worse, perhaps, is that much of Tayali’s work has a reference to social commitment. Says Tayali in 1979: “My art is concerned with the suffering of the people and I want it to be the echo of that suffering. I see the problems of the continent... I am just recording what I and my people feel, but I do not attempt to provide answers to our problems.” Clearly the “underprivileged,” (today’s key phrase) poor yet talented artists could have provided Tayali with a clear case for concern; but he had little appreciation for our self-help approach.

In 1976 the Art Centre Foundation decided to support the group Lusaka Artists Group. The Art Centre Foundation was a government sponsored body to promote and support the visual arts; and its members were a mix of prominent art lovers, artists, amateur artists and sympathizers. They also were part of the upper strata of society. Tayali was a prominent member of this club, representing the African in a dominantly European association. The ACF facilitated a room at the Evelyn Hone College which they regarded as their workshop but which in a practical sense was managed by us – we worked daily in that location. Once a week members of the ACF would come to teach us uneducated folks how to make art, or simply to discuss and talk about art – it depended on the ACF member(s) present. Tayali once in a while would also attend these meetings – occasionally demonstrating his superiority in a contemptuous manner. "I would not even put that in my toilet," he once said pointing at a lino print - and I am sure he would not and perhaps not entirely without reason.

Most of the work we did at the workshop at the Evelyn Hone College was graphic, mainly lino cuts and once in a while an etching. Our flourishing printing production had been made possible by Cynthia Zukas, who generously made a printing press available. In a sense this put us in direct competition with Henry, who also was a prolific graphic artists. And in fairness – much of his work at first was much better than most of our production. Tayali had been academically trained in graphics for several years, the Zambian LAG members all were self-taught and new to the art. Tayali, in graphics, had evolved his own, personal style. People like Patrick Mweemba and David Chibwe were experimenting with different styles and techniques and it took time before their explorations crystallised into a consistent and personal manner of print making. 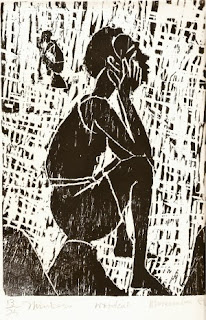 When these instructive meetings at the college workshop ceased we had virtually no contact. Henry did his thing, I did mine. I visited his house once, at the same University complex. It was full of his abstract paintings. The occasion was sad – his Ugandan wife had died. This was in 1976.

In 1980 I left Zambia to go back to school. I started afresh as a student in cultural anthropology. In 1985 I returned to Zambia to do my M.A. research on makishi, in association with UNZA. Incidentally I met Henry at the campus. We exchanged a few words. He had mellowed, the hostility was gone, he looked tired and kind of wasted. It was the last I saw of him.

Two years later he was dead, victim of the disease unknown to Zambia at the time he was infected by it. Aids in Zambia developed in the seventies, underground as it were, with people dying mysteriously, from causes unknown. It spread strongly in the eighties and by then had a name. Its exponential growth tapered down only after the turn of the century. National average infection rate presently has stabilised possibly in the order of 15% of the sexually active. By the time Henry died he may have known what trapped him – when he was infected he probably did not know HIV/AIDS existed.


He was a hard working man, ambitious and strong willed; a dedicated artist who, unlike most of the first post independence generation of Zambian art students, remained true to his vocation. Many of his colleagues became administrators, lecturers or other professionals with a regular salary. To them art became a peripheral activity in their lives; for Tayali art always remained the centre point of his professional existence. His graphic art especially, has lasting merit. By education and ambition he represented Zambian art and artists in all kinds of forums. He is/was one of the few Zambian artists with a genuine international presence. He also was the first indigenous Zambian artist to rise to lasting national and international prominence. He was the first indigenous Zambian artist to substantially introduce graphic art in the emerging spectre of Zambian visual arts; and thus was instrumental in the development of an artistic tradition that still is vibrant today. That, I believe, is his main artistic legacy.

Note: Wikipedia has a good page on Henry Tayali – just google it up.