Art in Zambia No 2: Fackson Kulya, folk artist. The personal story of our cooperation starting in 1975, leading to the formation of the Lusaka Artists Group. Fackson made original imagery, timeless and a-fashionable; a self-taught local artist making pictures as he liked it.

Note: This text complements the previous post about Fackson Kulya in the Zamart Blog “Tribute to Fackson Kulya” by a personal story of our meeting and working together during 1975 - 1980.

Fackson Kulya died years ago, literally out of sight, probably somewhere in the Luanshya countryside around 2000. None of us, his friends and co-workers in the second half of the seventies, knows the details and we only heard that he was dead long after he had been buried.

In 1975, the year of my arrival in Zambia, I was looking for fellow artists to work with. I found Fackson staying in one of the servant quarters of the University of Zambia staff houses at Handsworth Court, Lusaka. A kind expatriate lecturer had made the accommodation available to Fackson. There Fackson lived, penniless or near penniless most of the time. We would walk to Lusaka’s metal scrape yards and look for copper wire. These we’d hammer into bangles that we would hawk.

He was into bronze casting. That, of course, was another reason to scrounge the scrape yards. How he got into casting I do not know. He was not the only one. Better known and better accommodated was German N’goma, who worked together with Henry Jackson in a well laid out bronze casting workshop. Fackson did not have such technical privileges. He had a metal 40 gallon drum turned into furnace where he burned charcoal to melt the brass or bronze collected from scrape yards to pour these into the moulds he’d made. Some casts worked, others did not and eventually he did not carry it on. But the effort did illustrate initiative and an experimental drive.

True, I got him into lino cutting. Not true that Fackson had an “apprenticeship with me at the Art Centre (Foundation) Workshop at the Evelyn Hone College” (See the page on Fackson Kulya in “Art in Zambia” by Gabriel Ellison). The suggestion that Fackson and other self-taught artists, needed “apprenticeship” to do what they eventually did is wrong; so is the implication that these guys (Fackson Kulya, David Chibwe, Patrick Mweemba, Style Kunda) needed an academically educated artist to rise to national acknowledgement.

These men already had chosen to be artists; I expanded and improved some of their technical knowledge and skills, that’s all. We never talked about art, or about design, or aesthetics. We were mostly busy with the practical issues of making art (in an environment where many art materials were not available) and making a living out of it in an environment which, at the time, did not have a single Art Gallery. I am not saying that it would not have been sensible to talk about things like “composition,” “colour harmony,” or “what art does and can do in society,” or “making fine art in a country that did not have a fine art tradition in the western sense.” We just did very little talking about the imagery we were making.

The lack of the social infrastructure in Lusaka (and Zambia nationwide) necessary for art to work gave rise to the idea of establishing an organisation of artists working together. Fackson was the first recruit of what in 1976 became the Lusaka Artists Group.

He was a man of humble origins. A villager and to some extent a stranger to modern town life. He was used to hardships as hardship was the stuff out of which his life was made since birth. He came from Luanshya rural, a Lamba by tribe. He was born poor, lived poor and no doubt died a poor man. He would scoop out the leftover nshima (thick maize porridge which is the Zambian staple food) and save it for breakfast by warming the plastic bag with leftovers in hot water.

By December 1975 we had made a few pictures, enough to venture a show. It was to be in the Lusaka Public Library, next to the Lusaka Hotel, right in town. It was a very modest business, this exhibition. Just a few pictures on a board and a table in front of it where Fackson and I sat, waiting “for things to come.” In front of us were tables with people reading and studying library books, all was all quiet. 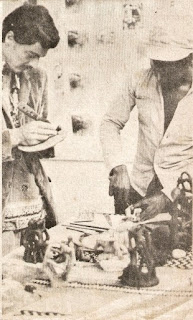 Photo 1. Fackson Kulya (right) and I at our modest stand in the Lusaka Public Library. Front page of the Times of Zambia newspaper of December 19, 1975. Photo by Times photographer.

At the time Zambia had two national newspapers, both government controlled. We went to the Daily Mail, to announce our exhibition, and were received by a journalist with the name of Daniel Mwale. He was interested, asked some questions, took some notes, brought in a photographer. 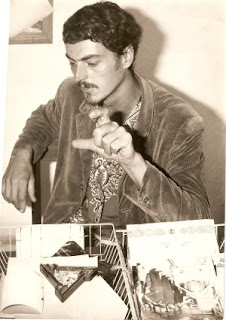 I did most of the talking and propagated the idea that “artists should co-operate” (even literally as a co-operative – it all suited very well the Zambian political ideology of the time), and Daniel keenly absorbed the notion that government money for the visual arts served mostly those already well-off (meaning artists having been educated and belonging to the higher strata of society) while the poor chaps living in compounds – the low class neighbourhoods - were neglected. Yet these guys were talented and able to produce art unpolluted by Western artistic and aesthetic conceptions.

Our sympathetic friend published these ideas and some of his own in a large article titled "Zambian artists urged to form a co-operative" in the “Daily,” utilizing the occasion to sharply attack the Department of Cultural Services. This created a major embarrassment as the ideas we were preaching were fully in line with government policies and ideology at the time, especially the co-operative bit. Having these ideas publicised the way Daniel did made the government Department of Cultural Services look incompetent and inadequate.

Several things happened. First, there was a disturbance of our peace and quiet at the Lusaka Public Library. Trevor Ford and Henry Tayali stormed the premises after the publication of Daniel’s article armed with expensive and big cameras. They photographed everything. All our little art work - the work we had was small in size and there was not much of it; as if it was subversive material, endangering national security. After this intimidating show the duo disappeared and unfortunately I have never seen a print of the photographs they took. Henry happened to be Zambia’s showcase artist at the time and Trevor was an internationally acknowledged cartoonist of Welsh extraction.

Second, I was summoned to the office of the then Director of the Department of Cultural Services, a Mr Mofia. He greeted me by insulting me persistently and provocatively. I kept my calm and told the man the simple truth, the truth being that the journalist was the one who had written the article and had used the occasion by voicing his own ideas now put into my mouth. I suggested he’d call Daniel to his office to sort matters out. That was that. Ooff.

Third, it got the Art Centre Foundation (ACF) into motion. That showed later, in 1976. I presume that right from the time of the publication of Daniel’s article some members of the ACF were seriously disturbed. The ACF was an organization having a mixed membership of well meaning art sympathizers, genuine art professionals, and amateurs whom together constituted a good share of people whom at the time were important in the Zambian art scene. It was a government sponsored body which on behalf of the government had been tasked “to promote the (visual) arts in Zambia.” The irony of the situation was that the Foundation had several progressive members in it “with a social consciousness” who not at all wished to short change poor artists emerging from Lusaka’s ever increasing compounds. These artists simply were not known to the Board members as they lived in a very different part of society. The ACF decided to support us self-styled artists, by that time formally organized as the Lusaka Artists Group. They arranged that the Evelyn Hone College made a space available, one of the ground floor prefab teaching rooms, and that became the Lusaka Artists Group Studio. Some ACF members, for a short time, would visit at late afternoons to discuss or criticise our work; to make up, so to speak for the education we were clearly lacking. I remember Tayali saying, pointing at one of Patrick Mweemba’s pictures, that he would not even put it in his toilet. That was a good example of constructive criticism. These visits tapered off and in practice for some years this was the place where most of Zambia’s art was produced. Notably people like Bente Lorenz and Cynthia Zukas have given the workshop much support. Cynthia made her etching press available and much of the etchings and lino cuts made during 1976-1980 have been printed on that press. The ACF also facilitated commissions, notably for the mural paintings at Longacres market. So in the end all worked out well.

Fakson in the early eighties moved back to where he came from: a village somewhere near Luanshya. A villager-artist. A stranger at home and in town. He kept on making art: drawings, paintings and sculpture in wood. He gained an awkward reputation: he felt that his work at least should deliver him some of the money he badly needed. I do not think that he was really interested in national recognition as an artist, what mattered to him was that he returned from his Lusaka exploits with money to buy fertilizer, sugar, a chitenge for his wife and cash for the school fees of his children. If the people where he had left his works to sell could not produce these Kwacha’s he would flare his temper to get what he needed. He deserved the money – even if his work had not been sold.

Fackson was a good artist. He made images as he saw fit to do and as he liked it and that is good enough. His work vibrates between the humorous, the bizarre, and the serious. He, in consideration of his background, made an extraordinary choice in life: to become an artist in the modern sense of the concept. A creator of original imagery. He did it with integrity. He deserves to be remembered among those who made the modern fine arts come into being in Zambia.