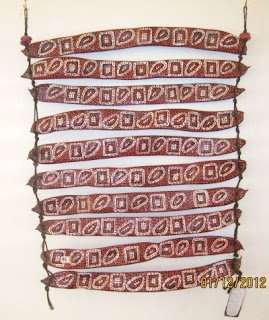 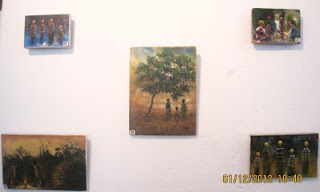 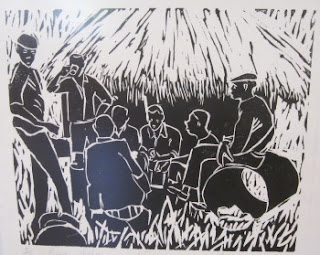 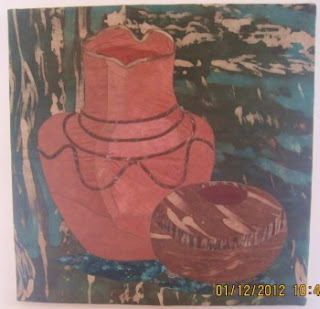 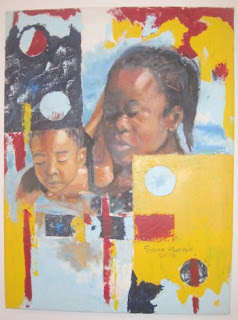 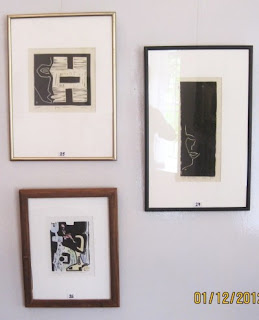 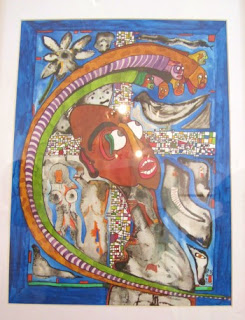 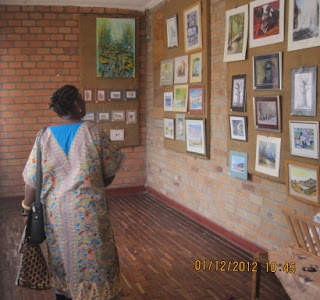 The 2012 X-mass exhibition of Arts and Crafts of the Southern Province of Zambia opened December 1st around noon. Director Mwimanji Chellah spoke the welcoming words, artist/organiser Bert Witkamp recounted how the exhibition came into being and Flexon Mizinga, Executive Secretary of the National Museums Board of Zambia officiated.


It has been some time since the Choma Museum hosted an art exhibition of national interest. Bert Witkamp took the initiative for this one and found fellow artists of the Southern Province willing to support and contribute. Agnes and Lawrence Yombwe, Sylvia Mwambo, Simon Chungu and Patrick Mweemba all submitted work. So did the Kalcho group of watercolour artists, which includes nationally know Eva Middleton. In addition crafts and applied art were on display created by Agnes Yombwe (earrings and bangles), Nchimunya Mweemba Witkamp (batiks and tie & dye), Tazimani Crafts Centre (traditional crafts of the Southern Province), Esnart Han'goma Mweemba (jewelry) and the Malambo Women’s Club (textiles).

The exhibition not only showcases the artists, artisans and their work; it also once more puts the Choma Museum and Crafts Centre Trust Ltd. in the limelight. The strategic importance of the CMCC, as Mr Mizinga observed, has increased now that Choma has been designated as the provincial headquarters of the Southern province.

On display are a large variety of objects ranging from the practical to the decorative or perhaps, for some, the incomprehensible. The latter qualification  might be applied to some art works. The opening, however, did amply provide for direct interaction between viewers and artists; and this gave rise to some lively discussions.

The exhibition underscores the importance of the Southern Province in the visual arts, applied arts and crafts. It also, for the occasion, allows the visitor to purchase extraordinary X-mass gifts.


Sequel to this post is about the artists and the art work on display.


The exhibition “Processes” opened 9 December 2012 at Shazula Cultural Forum. Shazula, owned and managed by artist Peter Gustavus and his wife Namo, offers acculturation courses and promotes cultural tourism. The exhibition successfully inaugurated the use of the facility as an art gallery.

The multi-cultural character of Shazula is reflected in the nationalities and backgrounds of the participating artists. Peter himself originates from Germany, so does Rosa Theresa Harter; Patrick and Esnart Mweemba are Zambians of the Southern Province; Bert Witkamp was born in the Netherlands and Barbara Lechner-Chileshe is Austrian.


The work on display, united by the common theme “processes,” also shows a considerable variety. Patrick Mweemba shows prints about printmaking, Peter Gustavus has on display what could be called vivid narrative imagery, Bert Witkamp shows older figurative oil paintings and recent geometric design  on pattern generation; Esnart Han’goma Mweembe shows figurative graphic art and a mixed media painting, and Barbara Lechner displays both narrative and non-figurative imagery. A pleasant outcome of this diversity is that visitors will always find something of their liking and something they dislike, adding interest to the visit and giving them something to talk about.

Discussion of matters of public interest is one of Peter’s predilections – he believes that exhibitions have missions. That believe is physically demonstrated by his “Seeds of Thought” – a collection of stimulating or provoking statements written on the pods of the flamboyant.


Barbara manages and supports Malaikha, a school for handicapped children. The work of one of her deaf pupils, Orment, is on display showing the discovery of image making by a novice. Barbara also did most of the work of getting a very nice and informative catalog published.

The opening itself was a pleasant and amiable affair; not only were the pictures good, so was the food, the drinks and the company. And last but not least, with some surprisingly good sales!


Shazula, to my knowledge, is the third Art Gallery of Southern Province. The Choma Museum Art Gallery is the oldest (established in 1993). Agnes and Lawrence Yombwe run a fine gallery named Wayi Wayi in Livingstone. Shazula, located off road between Monze and Mazabuka, is the latest. It is worth a visit!